Like no other before him, Jimi Hendrix with his howling Stratocaster formed the modern Blues-Rock. In 1966 Hendrix was discovered by Ches Chandler. The same year (at an involuntary jam-session in London), Jimi stole Eric Clapton (up to then guitar god with his group Cream) the show!
Over night he became the new superstar and with his band “The Experience” he was on the road to become No 1.

With the sale of Fender to CBS, the so called “Early CBS Years” had started. Things were changing, there were however but a few technical alterations in regard to layout and quality.
In 1966 the pickups were still manually produced, the magnet-wire insulation changed to a somewhat thinner Plain-Enamel type (brown and purple color) and as a curiosity of these years, the color of the base-plate was grey. 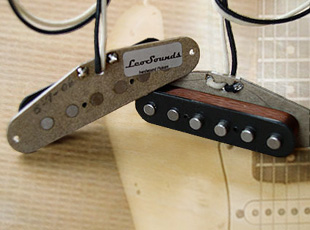 Character:
Lots of highs with distinctive Twang, very defined in all situations. Moderate mid frequencies and a tight bass fundament. A brilliant and bell-like tone. This is something for the connoisseurs of Strat tone.

Output: low
Specifications:
All material contained in this website has been Copyrighted © 2005 by LeoSounds.
Stratocaster™, Strat™, Telecaster™ and Tele™ are registered trademarks of Fender Musical Instruments (FMIC).
LeoSounds is not affiliated with Fender (FMIC).