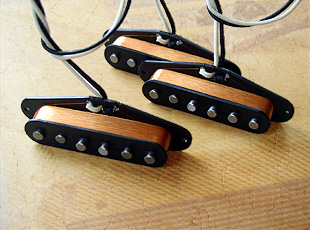 It’s the year 1956. Good old country music was slowly broadened by young white musicians from the southern states by mixing it with Blues elements. The new sound combined the colourful R&B with the music of America’s white middle class: Rock-a-Billy and Rock-and-Roll was born.
Elvis Presley celebrated enourmous successes with his “Hound dog” and “Blue suede shoes”. He became the King of Rock & Roll.
Buddy Holly, a brilliant musician, made his career with Rock & Roll. He became an idol for an entire generation of Pop and Rock musicians. His instrument of choice was a Stratocaster (1956, two tone sunburst).

The young Stratocaster model range was just about 2 years old. It still had the original standards i.e. one-piece maple neck and the legendary Spaghetti logo. In these early years, the pickups were produced by hand. The basic materials were Vulcanised Fibre for the mechanics and the relatively new magnet material ALNICO plus an AWG-42 magnet-wire with a thick isolation material called Formvar (dark golden colour). The magnet-poles were adapted to the output of the strings by using different lengths. At that time the G-string was wrapped and produced less output compared to todays blank steel string. 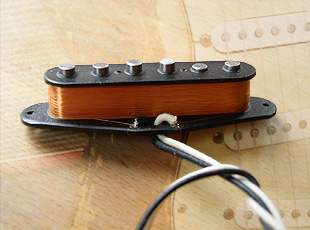 Character:
A balanced “best of all worlds” sound, not too aggressive at the higher frequencies but enough still Twang and, in spite of moderate inductivity, a little power package. Silky highs and enough mid frequencies are two remarkeable characteristics of is model. These pickups are my personal favorites for Stratocaster models.

All material contained in this website has been Copyrighted © 2005 by LeoSounds.
Stratocaster™, Strat™, Telecaster™ and Tele™ are registered trademarks of Fender Musical Instruments (FMIC).
LeoSounds is not affiliated with Fender (FMIC).